To Infinity, and beyond! – The Samsung Galaxy S8 takes aim at Apple and Google8 min read 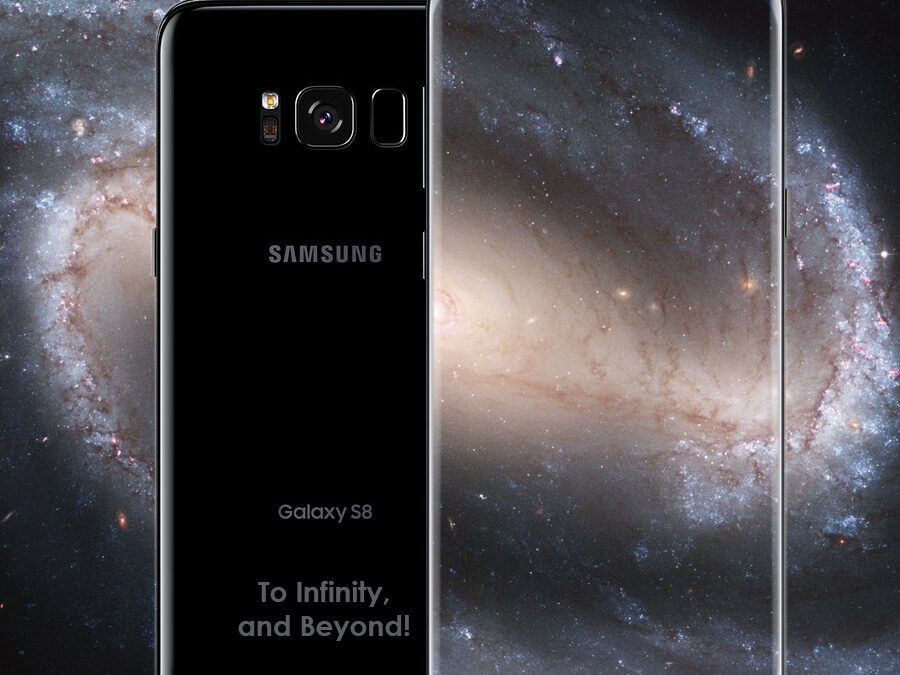 On Wednesday, March 29th, Samsung officially unveiled their newest phones, the Galaxy S8 and S8+. This will be the company’s first release since the Note 7, which had some minor combustion issues that you may have heard about. So these phones have got to be good as well as safe. During the release presentation, Samsung officials mentioned several times that they do rigorous testing of the batteries beyond the industry standards to make sure they are safe. They want the Samsung Galaxy S8 to wow you and make you forget about those other phones that may have had exploding batteries. I think they are going to do it.

Both of these phones have a striking new design that reduces the bezel of the phone (the edges of the phone around the screen) to make them as small as possible. This makes it look like the screen stretches all the way around the side edges of the phone, which is what Samsung calls the “Infinity Display.” It’s impressive. They have also removed the physical buttons on the front, so there is just screen. Other manufacturers have done small bezels on a phone before, LG’s G6 being the latest, but the aesthetic of the slightly curved glass that blends into the smallest of edges is a very unique design. Rumors are that Apple will release something similar with the iPhone 8, but I honestly believe that Samsung’s Galaxy S8 will look better than the new iPhone. Apple is merely playing catch-up here.

The iPhone 7 release was very disappointing for me. Apple removed the headphone jack, called it “courage” and proceeded to keep the design of the phone pretty much the same as it has been for years. The “innovation” in the design and the device itself was missing. The new Samsung release feels like the Apple of old, with a truly beautiful design and hardware specs that back it up. It comes with the latest processor that is supposed to be a little faster and more efficient than last year. The back camera has had software updates for some slight improvements, and the front one has been upgraded from a 5 megapixel to an 8 megapixel unit with facial detection and autofocus, as well as an iris scanner as another method of unlocking the phone. The base storage is now 64GB instead of 32GB, and you still have an SD card slot if you need more space.

The few downsides to the Samsung Galaxy S8 release seem like they are fairly small from my perspective, with one exception. This is not a cheap phone, with a starting price of $720-$750 from most carriers. That is a full $100 increase from the Galaxy S7 of last year and with all of the new hardware and design, it probably should cost more than last year’s phone. It is still an awful lot of money to ask for something that a lot of people replace every two years.

The location of the fingerprint scanner is on the back, but off to the side of the camera, which, honestly, won’t be optimal for everyone and may lead to smudging of the camera lens. We will have to see how the curved infinity display holds up to drops and damage in the real world. The battery is pretty much the same size as last year’s Galaxy S7, and non-removable, so we don’t know how the new infinity display and processor will affect battery life. The Samsung Galaxy S8 also has a dedicated button for “Bixby,” which is Samsung’s new assistant software. If there is one thing that Samsung does that annoys me, it is Samsung’s need to look at Google’s software and decide they need to make their own version of it. I will have to withhold judgment for when the phone is released as the servers for the assistant aren’t running yet, but from what I’ve read about the demonstrations of it, it feels gimmicky, relatively limited in what it can do, and operates as more of a search engine/connected device controller. I’m sure Google is thrilled about that.
I wasn’t expecting to get my hands on one until they were released on April 21st, but Best Buy has demo units in to look at. The location I visited had demo units for all three colors of the Galaxy S8 and S8+.

The screen is just as awesome as you think. I looked over the black Galaxy S8 and compared it to my current phone, an old Moto X from 2013 which is still one of the most comfortable phones I’ve used. The Galaxy S8 feels great in hand, being a narrow phone by today’s standards, but tall. I looked it over and could tell right away that the glass back was a fingerprint magnet. Not too much of a concern for me, but worth noting. I briefly looked at the fingerprint reader but was unable to test it because of the way I was holding the phone. It might just be something that you have to learn how to do over time. I was also concerned that the curved screen would lead to random accidental touches from my fingers or palm holding the phone, but that never happened, so it looks like it handles false inputs well. I also briefly tested the cameras. The back camera looked great, of course, but I was really surprised at how good the front camera was. I switched over to test it and it immediately detected my face and focused in on it. The images were sharp and the focus adjusted with my quick movements. Though I think $720 is a bit much to spend on any phone, I think that the Galaxy S8 seems to actually justify paying more for a phone.

While I wish it had a removable battery and it was a bit (ok a LOT) less expensive, the Samsung Galaxy S8 is a great looking phone with great hardware that helps justify the cost. This very well could be my next phone. The Galaxy S8 will be released April 21st, so we will see if it can live up to the hype. Hopefully, their sales will be the only thing that blows up.